Changes to your Victorian Energy bills

Many changes have happened in energy in Victoria since 1 July 2019, such as the Victorian Default Offer (or VDO), best offer messaging and solar feed-in tariffs changes.

As of 1 January 2020, the VDO will be introduced for time of use electricity rates and existing VDO rates will change for certain customers.

We’ve outlined these changes below but it’s worth noting that there could be more to come. We’ll keep you updated.

These rate types moved to the Victorian Default Offer rates from 1 July 2019 and will change again on 1 January 2020:

From 1 January 2020 customer on plans with these rate types will also move to the Victorian Default offer rates:

It will also serve as a comparison for discounted electricity offers. For example, if an energy company is offering a ten per cent discount, that discount must be compared to the Victorian Default Offer.

The Victorian Government introduced the Victorian Default Offer to make it easier for consumers and businesses to compare energy plans across different retailers.

It’s intended as a safety net for residential and small business customers who don’t have the time or access to compare market offers provided by electricity retailers. It also ensures that customers who can’t or don’t want to engage with their energy retailer will pay lower energy costs.

The reference price will make it easier for consumers to make ‘apples with apples’ comparisons between different energy retailer offers for electricity where discounts are included.

The reference price has been calculated for each electricity zone based on the average usage.

Usage is kWh per year and all prices include GST.

There are three components to comparing a reference price.

For example, here’s a Victorian electricity offer in the CitiPower distribution zone:

Estimated annual electricity cost for an average household in CitiPower, based on a residential flat rate.

This means EnergyAustralia’s offer is 7% less than the reference price for annual electricity usage for an average household in the Citipower distribution zone. 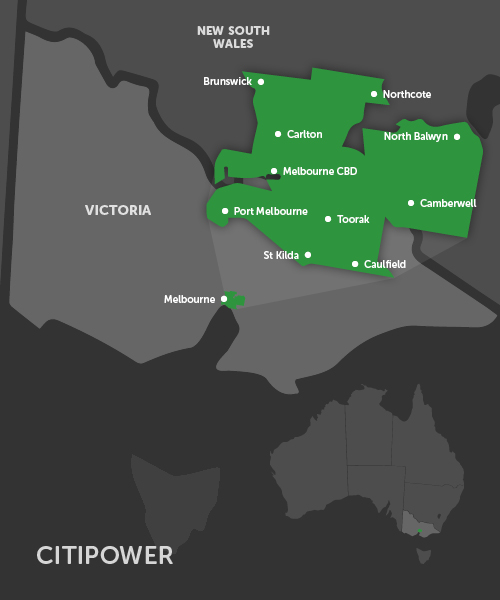 Your energy distributor is the company responsible for the poles, wires and gas pipes in your area. You’ll find the name of your distributor at the top right hand side of your energy bill.

There are five distribution zones impacted by the Victorian Default Offer across Victoria.

CitiPower owns and manages 157 square kilometres of electricity poles and wires in the network. It provides power for more than 330,000 customers in Melbourne’s CBD and inner suburbs.

Powercor manages more than half a million poles and over 88,000 kilometres of power lines, providing electricity for nearly 820,000 homes and businesses in central and western Victoria, as well as Melbourne’s western suburbs. 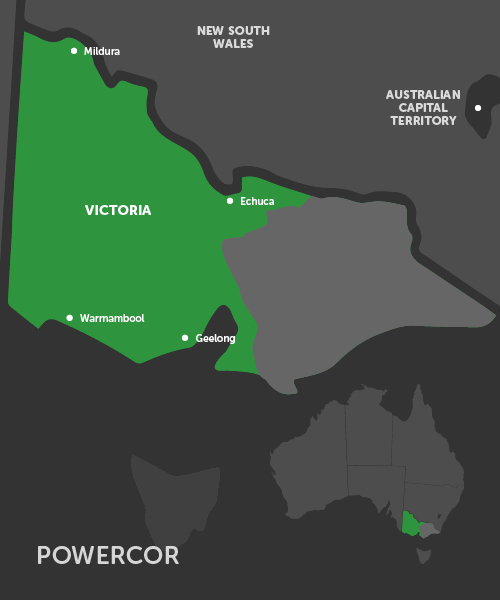 Jemena owns the poles and wires powering over 343,000 homes and businesses in Melbourne’s inner north-west. 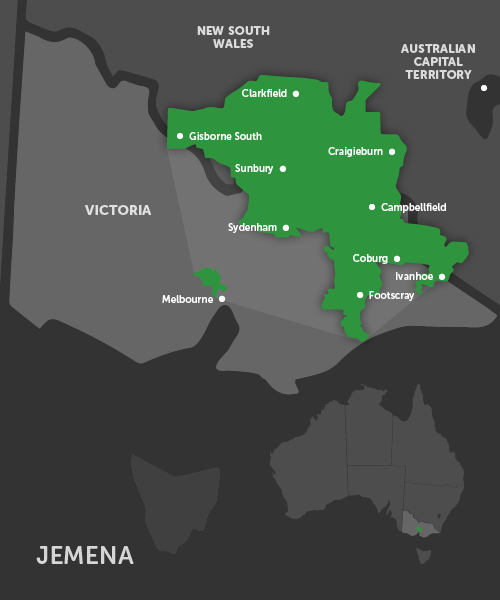 United Energy distributes electricity to more than 660,000 homes and businesses across east and south east Melbourne and the Mornington Peninsula. 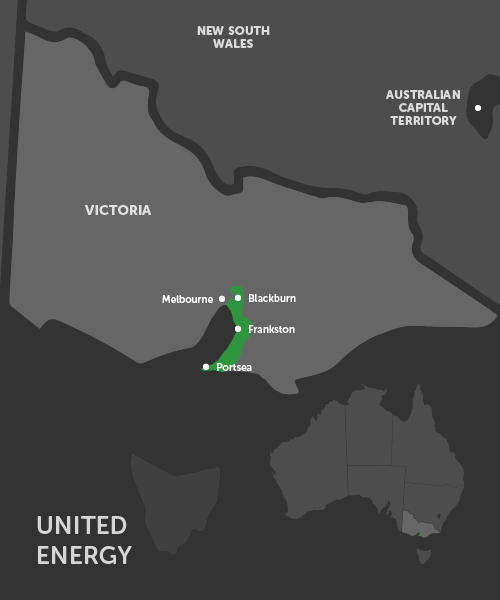 AusNet Services looks after the poles and wires for 740,000 homes and businesses in Melbourne's north and east and across all of eastern and north-eastern Victoria.

It’s a tariff where you’re charged the same rate for electricity throughout the day and night. There is no distinction made between peak and off-peak periods like time of use tariffs.

A flat rate tariff is usually lower than peak but higher than off peak and shoulder rates.

What is a time of use tariff?

With time of use tariffs, different usage rates are charged for the electricity you use at different times: off peak, shoulder and peak.

Controlled load electricity refers to electricity being used by a stand-alone item, like an electric hot water service, electric slab heating and irrigation pumps. Controlled loads are recorded by a separate meter and can be billed as an off-peak rate.

Our Basic Home or Basic Business plan is a standing offer that has no discounts. It applies to a customer who does not actively choose an energy plan with an energy company.

When someone moves into a premises and the electricity or gas is already connected, any consumption is charged at the standing offer rates until the resident chooses another energy plan.

If you’re on a Basic Home or Basic Business plan with time of use rates, your standing offer rate will automatically change to the Victorian Default Offer from 1 January 2020.

The Victorian Default Offer rates are set by the Essential Services Commission (ESC) in Victoria and will be reviewed every January.

The Victorian Default Offer rates will be set by the Essential Services Commission (ESC) in Victoria. The ESC will review the reference price every year from 1 January 2020 onwards.

If you’re on a Basic Home or Basic Business plan with time of use rates, your standing offer rate will automatically change to the Victorian Default Offer from 1 January 2020.

We’ll have contacted you to let you know how you are affected by the Victorian Default Offer.

If you’re on a market retail plan (an energy plan with the prices set by the retailer typically with a benefit or incentive like a discount or a credit to your bill for a fixed amount of time), your rates won’t automatically change due to the Victorian Default Offer. Your rates might change depending on the type of plan you’re on. If your plan is affected, we’ll tell you in advance by mail or email.

From 1 July 2019, all electricity Victorian households and small businesses will be able to access the Victorian Default Offer, except for customers in embedded networks.

This is a type of electricity infrastructure generally managed by the building owner. A person living in an apartment complex, retirement home, caravan park or tenant in a shopping centre may be receiving their electricity via an embedded network.

Pricing is more complicated for embedded network customers. You usually get your electricity from exempt retailers who are not required to offer standing offers rates to customers.

The Victorian Government has decided to defer the application of the Victorian Default Offer as a maximum price for embedded networks, as it needs more time to work out what would be the right maximum price.

If you're not on a standing offer and you want to access the Victorian Default Offer, you'll need to sign up to Basic Home or Basic Business plan on the following rate types:

No, the Victorian Default Offer doesn’t apply to gas.

For customers on a flat and controlled load rates

Your 15% discount that you have been receiving since January 2019 won’t apply after 1 July 2019. However, the good news is that you’ll be paying less than what you are now, as we have lowered your rates.

For customers on time of use rates

Your 15% discount that you have been receiving since January 2019 won’t apply after 1 January 2020,
as you’ll be receiving the lower Victorian Default Offer rates that have been introduced. We will send you an email or letter to let you know about the rate change and how it will impact you, as it will depend on when and how much electricity you use.

How do I find which plan I’m on?

There are time of use and single rate solar feed-in tariffs changes from 1 July 2019.

You would have recently received a notice from us telling you that your feed-in tariff has changed. This was our mistake, so please ignore it. The premium feed-in tariff you currently receive will remain the same until 2024. We’re sorry for any inconvenience this may have caused.

Between 1 July and 1 October 2019, all energy retailers will start to include a best offer message on the front of their bills. This message will inform you whether or not you’re on the best priced advertised plan available from us for your needs. The message you get will be based on your energy usage over the past 12 months or an estimate if we don’t have 12 months usage and whether or not you can save more than $22 (including GST) a year. 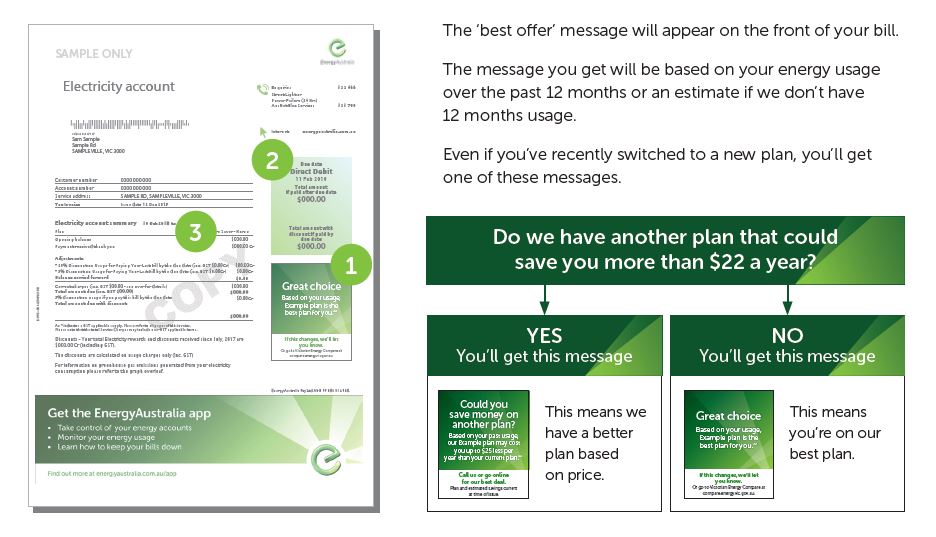 It was introduced to help you understand if you’re on the best priced advertised plan or not. All energy retailers are required to have these messages on their bills after 1 July 2019.

If we have another plan that could save you more than $22 a year (including GST) then we’ll tell you. If not, we’ll let you know that you’re on our best priced advertised plan available for your needs.

This means that you’re not on our best priced advertised plan available and you can save more than an estimated $22 a year on one of our other plans.  You can easily find a better plan for you based on your home and business on your usage online, or you can call us to discuss your options.

This mean you’re on our best priced advertised plan, and we don’t have an alternative that can save you more than $22 a year.

If your circumstances change, you can still contact us to discuss other plan options.

The best offer message is calculated at a point in time, based on the plans we have available and an estimated usage information we have for you. Our available plans and your usage can both change.

We have now included a statement on your bill to remind you of this. It can be found here.

There will be no change to how you include the GST on your energy purchases in your BAS.

Compare our residential electricity and gas plans and find the one that’s right for you.