A first of its kind power partner-sheep

Near Kerang in Victoria’s north, GESS is co-located at the site of the pre-existing 50MW Gannawarra Solar Farm.

And from the beginning, that co-location and retro-fitting of an existing solar farm, has made it one of Australia’s most innovative solar projects since it commenced operations in March 2019.

Featuring a retro-fitted Tesla Powerpack system and jointly owned by EdifyEnergy and Wirsol Energy, GESS is the first integrated solar and storage project in Australia – among the largest of its kind in the world.

EnergyAustralia is the market operator and has the rights to charge and dispatch energy from the battery. This is in addition to the energy offtake from the solar farm.

The combined solar and battery system provides power at peak times when there is no sun, producing a more consistent energy supply.

Housing a Tesla Powerpack battery system, also an agri-business, populated by sheep that graze the area – perhaps the ‘sheep’ of things to come with energy and agricultural pursuits working together?

Working with key partners to bring projects to life

This partnership brought an extensive set of unique skills to the table.

According to EnergyAustralia Head of Portfolio Development Daniel Nugent, Edify Energy’s expertise as renewable developers ensured they were best placed to manage the development.

Edify Energy is a leader in the Australian renewable and green tech market with an impressive capability and record of bringing these sorts of projects to market at speed.

“As a nimble, lean developer, they (Edify Energy) are very good on the development side and securing approvals and government funding and connection arrangements and financing… that’s their bread and butter,” Mr Nugent said.

And EnergyAustralia was best placed to manage the market risk.

“We have a big trading team and market risk functions, so we were able to provide a fixed contract, fixed revenue to the owners of the project and we’re best placed to manage the market risk and optimise the battery in the market,” he said.

Edify Energy’s Head of Energy Markets, Andrew Stiel, said that it was great to partner with EnergyAustralia in this ‘trailblazer’ project.

“I think every company has a role to play in in driving this energy transition. Edify Energy brings specialty in renewable and storage project development and… Energy Australia… brings this deep, deep experience and expertise in managing energy market risk and what to do with products that come from renewable generators such as the Gannawarra Solar Farm and battery and how you ultimately supply that power.”

“It's the combination of these areas of expertise that's … required to drive this this energy transition that we're all on,” he said.

At the time, no other renewable energy project had been retro-fitted with a battery, making this project the first of its kind in Australia.

“What the battery does is basically leverage all the connection infrastructure that’s already there which was sized for the solar farm but works around the solar farm…,” Mr Nugent said.

This means the battery is being charged when the solar’s working at full capacity and discharged when it’s dark and there’s no solar output.

Mr Stiel added that the employment of around 250 people during the construction and the retro-fitting had a positive impact on the Kerang community and local region, with an approximate $5 million boost to local accommodation, hospitality, the trades and services sector.

“(We’re) proud to be a part of… driving the assets that ultimately help local regions and communities as well,” he said.

Stabilising the grid for now and the future

For EnergyAustralia, GESS stands out as a key asset as we work towards a cleaner, more sustainable energy future.

Capable of powering more than 16,000 homes through two hours of peak demand before being recharged, GESS will continue to take pressure off the grid and be an integral part of the suite of clean energy transition projects that we’re doing – not just dreaming – at EnergyAustralia.

Our Climate Change Statement, available here, lists other current and future projects that we’ve got going or exploring as part of our commitment to better energy – for all of us.

The 316-megawatt power station, being built with the support of the NSW Government, will sit alongside the existing Tallawarra A power station on the shores of Lake Illawarra in New South Wales, and pave the way for more renewables to enter the system. 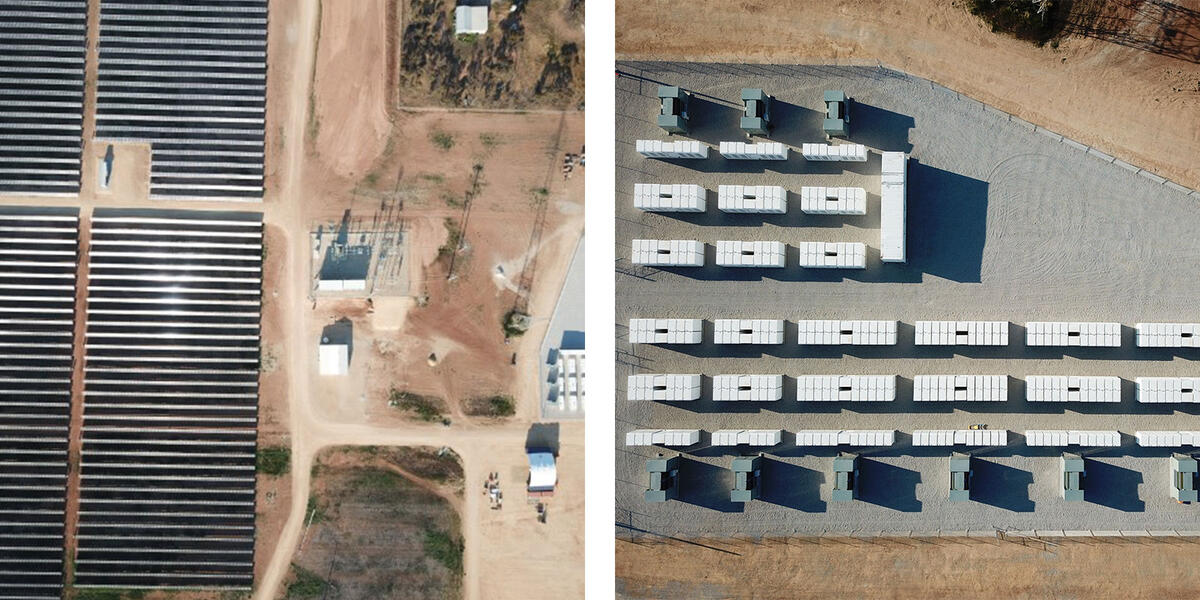 Due for completion during the summer of 2023/24 and developed on traditional lands of Wiradjuri Country, the Darlington Point and Riverina Battery Energy Storage Systems are 90MW/180MWh in combination, and will have the potential to power more than 46,000 homes for two hours of peak demand before being recharged.

For more information about EnergyAustralia’s commitment to better energy for all of us, visit Doing. Not just dreaming.

The GESS project was supported by the Victorian Government and the Australian Renewable Energy Agency.

What are ‘ewes’ doing?

Lambs are generally considered friendly and gentle animals, but this flock has a particularly sunny disposition – and they’re doing a great job as employed groundskeepers too.

Around 200 hundred sheep live on the GESS solar farm, helping to manage vegetation and using the panels for shade from any wild and woolly weather. See them in our video.