EnergyAustralia calls for women to consider a career in energy

EnergyAustralia, one of Australia’s leading energy companies, today launched a new recruitment campaign aimed at encouraging women to consider a career at the coal face of the country’s power generation industry.

The company plans to advertise 10 operational roles at its Yallourn power station in Victoria’s Latrobe Valley from early November. While women fill a variety of critical operational roles across the site, including driving huge dump trucks at the adjoining mine, there are none working as plant operators or apprentices.
“At EnergyAustralia around half our senior management team is female, any one of whom could walk into an executive role at a top 100 company,” said Managing Director Catherine Tanna. “But while we’re making great progress in gender balance across our leadership roles, there are parts of our business where we have ground to make up.
“I don’t believe in waiting for things to happen so I’ve set a goal: By the time I hand over EnergyAustralia to someone else we will have women operators at our power stations. The recruitment campaign we’re announcing today is aimed squarely at making good on that commitment.”
EnergyAustralia will advertise for applications for five female power station trainee operators and five female apprentices to join the 500-strong workforce at the Yallourn power station in 2017. With generation capacity of 1400 megawatts, Yallourn is one of Australia’s largest power stations and provides enough energy to meet around 22% of Victoria’s electricity demand.
“I love working in the energy sector because what we do is fundamentally good and important for the wellbeing of everyone,” Catherine said. “Right now we’re at an exciting time in the industry’s evolution with a wonderful opportunity to lead Australia’s transition to cleaner forms of energy.”
In March 2016, EnergyAustralia was recognised as one of the world’s leading power and utility companies for its representation of women in senior management, ranking in the top 20 of EY’s Women in Power & Utilities Index.
Catherine said filling 10 roles might sound an easy task, but the energy sector had historically low female participation and recruiting women continued to be a challenge. Women comprise around 23% of the utility industry workforce in Australia, compared to 46% more broadly.
“I hope we can convince more women to see energy as a great option for a rewarding career and an opportunity to play a role in leading the industry toward a lower-emissions future,” she said.
Rebecca Fraser, Head of Human Resources for EnergyAustralia’s energy business, said the workforce at Yallourn was backing the campaign.
“Diversity and inclusion are integral to the culture we’re building at EnergyAustralia and the benefits are clear: Companies which embrace diversity do better, whether that’s the productivity of their workforce, innovation in their products and services or bottom-line earnings,” Rebecca said. “And it’s the right thing to do, so all of EnergyAustralia is right behind this campaign.”
Rebecca said EnergyAustralia had looked into the barriers to female participation in the energy industry. We found flexible working arrangements and equal pay were important, but the research also found women were more reluctant to apply for roles when they didn’t meet all the advertised employment criteria.
“Women in particular will often wait until they feel 100% qualified before taking on a challenge. We don’t see that behaviour as much in men. So, if there are women thinking about making a career change, please give some thought to the energy sector – and don’t self-select out of opportunities,” Rebecca said. 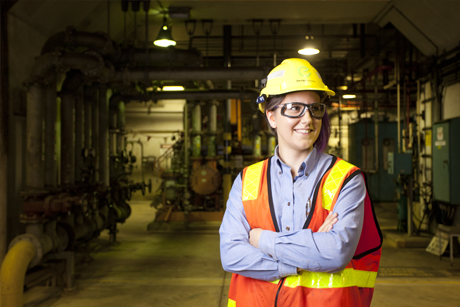