EnergyAustralia, one of Australia’s leading energy retailers, today briefed the federal government on the potential for a pumped hydroelectric storage project in South Australia to support delivery of cleaner, reliable and affordable supplies of energy.

Managing Director Catherine Tanna and Executive – Energy Mark Collette updated the Cabinet Energy Committee in Sydney on the progress EnergyAustralia and partners Melbourne Energy Institute and Arup Group have made in the past 12 months investigating a pumped hydro project using seawater.

Located in the Spencer Gulf of South Australia, the proposed project would have the capacity to produce around 100 megawatts (MW) of electricity with six-to-eight hours of storage. That’s the equivalent of installing 60,000 home battery storage systems, but at one-third of the cost.

“Pumped hydro storage using seawater is just one of the innovations we're looking at to increase Australia's supplies of cleaner energy,” said EnergyAustralia Managing Director. “The technology works like a giant battery. Its great advantage lies in complementing the shift to renewable energy by providing a reliable store of affordable power.

“On hot days, when demand spikes, a pumped hydro plant can be brought into action in minutes, keeping the lights on and costs down. We're really excited by its potential," she said.

Ms Tanna said while some proposed projects, like interconnectors, tend to shift reliability issues, energy storage, whether in the form of pumped hydro or batteries, actually solves the problem.

Pumped hydro is a form of hydroelectricity that does not rely on rivers or flowing water. Fresh water pumped hydro has been used for decades in countries including the United States, Japan and China. In 2013 Melbourne Energy Institute and Arup started assessing how the technology could be adapted to Australia’s dry conditions using seawater.

“The proposed project for South Australia would not only be the second example of a seawater pumped hydro storage plant anywhere is the world; it would also be the largest,” said Stephen Thompson, Leader Strategy, Policy Advisory for Arup in Australasia.

The proposed site on the northern end of the Spencer Gulf has 300 metres of elevation and is within two kilometres of the coast, close to high voltage transmission lines. “It’s the ideal site for pumped hydro energy storage with seawater in South Australia,” said Dr Roger Dargaville, Deputy Director of the Melbourne Energy Institute at the University of Melbourne.

With pumped hydro, water is pumped from a lower reservoir to a higher one when energy is cheap. Then, when demand for power is high and prices rise, the water is run down again and put through a turbine to generate electricity. Because the water is reused, this process can be repeated.
EnergyAustralia and its partners are aiming to have a feasibility study done on the project by the middle of 2017. If the project is viable, detailed engineering design work, environmental impact statements, consultation with stakeholders and applications for government approval will follow.

Construction would take around two years, which means the project could be providing peak power to the grid by the summer of 2020/21. 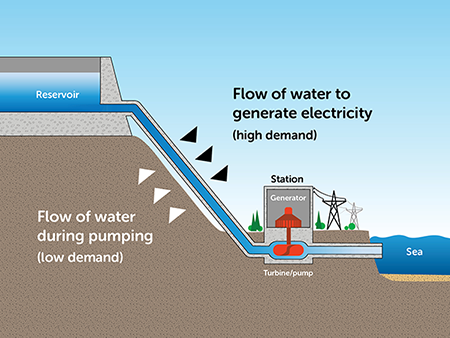