The team working on the construction of Tallawarra B, a gas and hydrogen power station in the Illawarra region of New South Wales, celebrated National Reconciliation Week 2022 with the production of a very special painting.

The project team, made up of people from EnergyAustralia, as well as GE Electrics and Clough Construction, started work on the piece in April with a visit to the Coomaditchie United Aboriginal Corporation.

Under the guidance of Aunty Lorraine and Aunty Narelle, the team was inspired by Aboriginal art as they worked on the painting over many weeks. The Aunties then added their finishing touches. 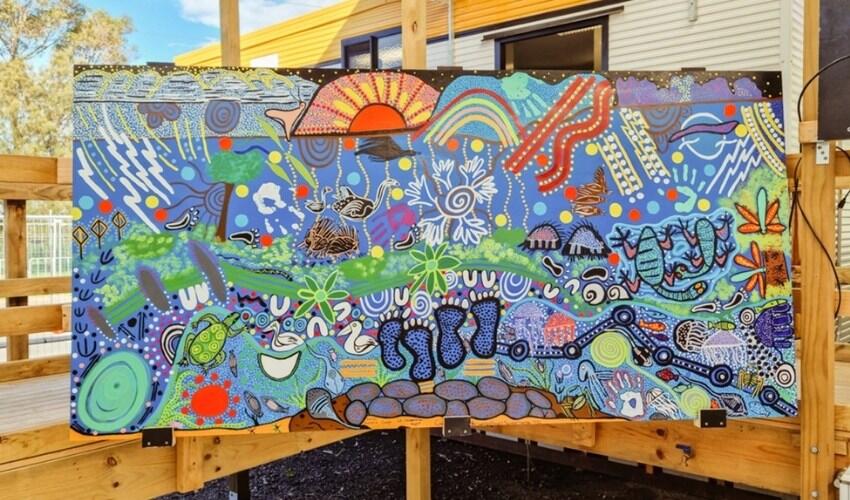 The completed artwork depicts the side of Lake Illawarra where the power station is being built. Black swans, jellyfish, Eastern long-neck turtles, an abundance of fish and many bird species can be seen.

Sarah Hafez, EnergyAustralia’s Communications and Community Relations Lead at Tallawarra, said, “It was great to see people you wouldn’t normally think of as being artistic, taking up a paint brush and really getting into the process.

“Hearing about the Dharawal culture and history from the Aunties was really insightful – we learnt a lot about the traditional owners of the land on which we live and work.

“The final piece is really special to us and includes lots of references to the Tallawarra B project and its location on Lake Illawarra. If you look closely, you’ll even see the gas turbine, which will make up a key part of the power station, represented,” she said.

The collaboratively produced painting was unveiled on 1 June 2022, during National Reconciliation Week, and blessed by the Aunties.